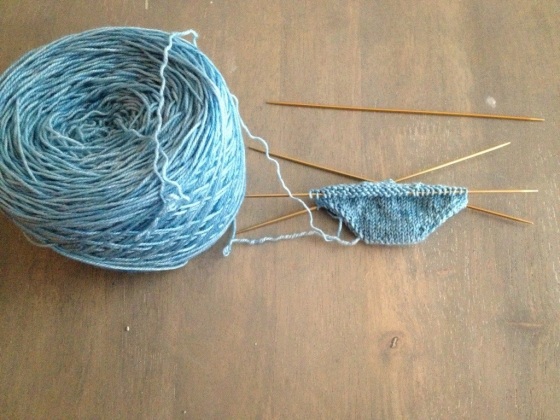 That’s right. I’m admitting it. I have way too many WIPs going on.

I think I’ve firmly established myself as a Process Knitter. For those of you who don’t know what that is (no secret, I’m a Knit Picks podcast-aholic), it’s process vs product knitter. The process knitter loves the making of projects. Product knitters knit for the end result, the beautiful knit. Neither one is better than the other! It’s just a personality thing.

That explains why I need to have so many projects. I seldom wear the things I make. More often, I find someone to give them to. Yet, I love casting on new projects. I love having so much going on. Each project fits my mood. Some are for other people so have deadlines. Some I cast-on something just to work on in a movie theater or in the car. Some I start because I just because. I love it!

And I love that moment when I step back and see what I’ve made. As I knit, all I see are stitches. I don’t see a sweater or mittens or socks or a cowl. I see one stitch at a time.

What are my WIPs?

And maybe I might cast on a pair of knee-highs for me.

This next week I will probably bury myself in my knitting. I’ve been trying really hard to not think about it. Next Tuesday, March 19th, was supposed to be one of the happiest days of my life. It’s the due date for my son/daughter. That’s rough (and that’s an understatement). I’ll have to go through this again in July, having lost another son/daughter in January.

But I have my knitting. It’s helped me overcome so much. When I feel myself falling apart, I pick up my needles. I work on something to take my mind off of it, and in the end, I get something beautiful and something I can hold. Knitting has given me so much. That’s why I love to share this craft and teach others. You never know what knitting will give you.

I also have turned to losing weight, which I’ve written about a handful of times. I have lost 23 pounds since January 6th. There’s a very long way to go, but I’m well on my way. I’m not stopping until I’ve reached my goal. In fact, this morning, my husband and I are closing out week 6 of Couch to 5K. That means 25 minutes straight jogging, no walking. I have such a great support system. My husband (who is the size of a toothpick!) wakes up before the sun with me to go running, and on Tuesdays and Thursdays, a friend from work and I go to the gym. I’m set up for success, and I love it.

So, now that I’ve been depressing, I just want to wish you all a very happy weekend! Any fun plans?

61 thoughts on “What Knitting is to Me and Too Many WIPs!”