Last week I wrote a little bit about what you’ll need to get started. Now that you’ve got your yarn and needles handy, let’s get started on the actual knitting part.

I need to put one thing out there right away. The way I’m going to teach you to knit is only one way. I’ve heard it said (and it’s very true) that there are as many different ways to knit as there are knitters.

This can also be an awkward process. It takes a while to get used to the movements. One of my students likened it to chopsticks: Once you’ve used them for a while, you forget how awkward they were in the beginning, but the start can be tricky.

Then again, you might pick up quickly! Don’t worry if you don’t, and be excited if you do!

And you’ll likely make mistakes. For several months, I knit and purled backwards, moving the yarn the wrong way around the needles. I still ended up with garments that I’m proud to wear, including my favorite though completely flawed Selbu mittens. I’ve been knitting full-throttle now for over a year, and I still mess up, particularly when trying out a new technique. It happens. I’ll show you in the next lesson what to do when it does.

First and foremost, wind your yarn into a ball. If you have one or have access to one, you can use a ball winder. That was one of my favorite investments. It creates a center-pull cake that sits flat.

Why do you need to wind your yarn? For your sanity’s sake. Some yarn comes center-pull already, and some comes in hanks. If you just grab an end and start knitting, you’re going to end up with a huge mess. It’s a nightmare. Trust me. I’ve done this enough times to know.

For reference, the skein is the one on top and the hank is the one below.

Remember the old image of a kid with his or her hands out holding a loop of yarn as grandma or mom (or whoever) is winding a ball? That’s a hank! You can wind this by having someone hold their hands just like that. I find that’s easiest unless you have a swift. That’s a new toy of mine, so I used to enlist help if I could. I’ve even gone so far as put it around my feet and almost do sit-ups as I pull the yarn and wind it.

If you have a skein, like what much of Michaels’ and Hobby Lobby’s yarn comes in, you’ll want to find that center pull I was talking about. Though it’s easiest to find the outside yarn, you don’t really want to start winding from there. I’ve never had much luck keeping that untangled.

Reach into the middle, like in the picture below, and pull out it’s innards. Sometimes you’ll get lucky and the end you want is right near the top. Other times, it’s buried and wrapped up a bit. The picture below shows the guts of the skein I’m working with.

Even if you’re working from a center-pull skein, it’s still good practice to wind the ball. Go do that now. I’ll wait.

There are two main ways to knit: Continental (picking) and English (throwing). I knit Continental. I made a very conscious decision when going with Continental. To me, it’s less movement (just how it struck me in the beginning). Continental means I move my working yarn with my left hand. You don’t have to be left handed for this to work. I’m right handed.

While I’ll be showing you the Continental method, you can easily do all of these lessons with English. Instead of moving the yarn with your left hand, you’ll be moving it with your right hand. It’s as easy as that. The yarn still goes the same direction for the stitches.

1. Make an upside down u-shape with the yarn on your palm with the end on the right side.

2. Cross the end over the main yarn, creating a little loop.

3. Slip two fingers into that loop. Then, grab the main yarn with your fingers and pull it through the loop.

4. Tighten your first loop around the second, so you only have one now.

5. Put your final loop around your needle. Tighten it just enough to fit around the needle, not enough to strangle it.

That’s a big thing to remember. You want the stitches to fit around the needle, but you don’t want to tighten them down so hard that they’re difficult to work with.

There are so many cast-ons you can choose from for your projects. I often use the long-tail cast-on for many of my projects, as it’s fast. However, we’re going to do the Knitted Cast-On. This is a great way to get the hang of the movements for knitting right from the start.

When you knit, you’re moving the stitches left to right. So, when you cast-on or when you pick up your project to work with, the stitches you are about to knit should be in your left hand. So, we’re going to pick up the slipknot needle and hold it in our left hands. 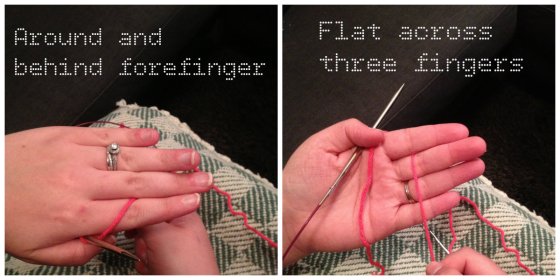 There are many ways to hold your yarn (so many). I wrap the working yarn behind and around my index finger. Then, I lay it across my last three fingers. This gives me a loose grip that lets the yarn move freely as I knit.

2. Move the working yarn from the back to between the needles in your “x.”

3. Use the right-hand needle to guide the wrapped yarn down through the slipknot. You should now have the slipknot on your left needle and the new stitch on your right needle.

4. Put the new stitch onto the left needle.

5. Continue this process, making a new stitch out of the previous stitch, until you have 20 total.

You already know the basic movements for knitting, after having cast-on. So, this part won’t be too difficult!

1. Slip the right-hand needle under the slipknot and behind the left-hand needle. This will make an “x” or criss-cross shape.

2. Move the working yarn from the back to between the needles in your “x.”

3. Use the right-hand needle to guide the wrapped yarn down through the slipknot. You should now have the slipknot on your left needle and the new stitch on your right needle.

4. When you were casting-on, you moved the new stitch to the left needle. Instead of doing this, you’re going to keep your new stitch on the right needle. Slowly move the left hand stitch off the needle, making sure that no more fall off during the process and holding onto your first stitch.

Do this until you reach the end of your row. Then, turn your work. Move the right hand needle to your left hand and start knitting again. Repeat this until you feel comfortable with the knitting movement.

Count your stitches after each row to make sure you still have 20. After a few rows, your sampler will start to look like this:

Don’t worry if you seem to be increasing or decreasing the number of stitches you’re working with or suddenly you have holes. My first couple of knitting attempts looked like Swiss cheese. Next week, we’ll talk about how to identify when a mistake has occurred and how to fix it.

16 thoughts on “Knitting 101: Casting On and Knitting”