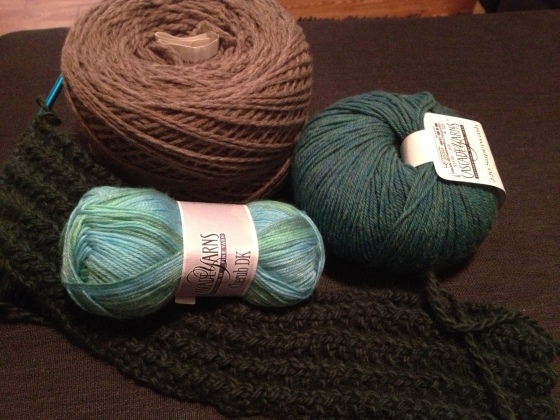 The newest additions to my stash

4. Try not to buy anymore yarn.

This was a crazy weekend. I say that a lot, and I mean it a lot as well. On Saturday, husband and I decided to make a trip down to Ikea and stop off at a local yarn store on the way. I’d heard about the Old Spinning Wheel yarn shop on Facebook and around the Internet, and I’ve been dying to find a nice, local place I can frequent. My husband even pointed out that I’d never been to a true yarn store, just stores that also carried yarn. So, this was to be an adventure! (Cue the adventurous music.)

Turns out, this is not one of those places. Let me clarify. The store was amazing! It’s this cute little building in the middle of nowhere. They sell mostly Cascade yarns (I say mostly because I didn’t see very many other brands, but I wasn’t looking closely either), and they have Knit Picks needles. They also have knit groups on Thursdays and Saturdays, which I thought was pretty cool. The only reason I won’t be a regular is that it is in the middle of nowhere. It’s also an hour and a half drive from here (in Texas terms, not that far, I admit).

I added to my stash while there. Oooh yarn. Pretty yarn! I was so excited. I was like a kid in a candy shop. There were so many gorgeous colors to choose from that I was surprised in the end that I gravitated toward a very particular set of colours. For a girl who loves orange right now, I bought all greens and grey/browns.

This store then went above and beyond my expectations by offering to wind my yarn. At first I was resistant. Don’t ask me why. I think I just didn’t want to trouble them. Then one of the owners convinced me to do so with the particularly large hank, telling me that my little Knit Picks winder wasn’t going to be able to handle something so big. She was right, so I went for it. I’m still floored by them just offering to wind it! It just finished making this trip a great one. Is this common in other yarn shops?

I have all Cascade brand yarn in this group. The huge cake is the Ecological Wool in latte. The smallest skein is Cherub DK Multi in Lily Pond. Then, I have the 220 Superwash in Lake Chelan Heather. Last but far from least! I have Baby Alpaca Chunky in Forest Green, which in the picture is what’s being knit up. I tried to resist the urge, I really did! I just couldn’t. The alpaca yarn is so soft and squishy!

Because I have only about 100 yards of the alpaca, I had to really choose what pattern to use it with carefully. After much deliberation and a false start, I chose the Paddington Neck Warmer by Roxanne Wood. What a fast pattern to knit up! I mean, granted, I don’t have a ton of yarn and it is chunky, but still. I’m well over halfway done knitting the project. Next, I’ll block it and then try to find the perfect buttons. I’m thinking wooden, maybe toggles. We’ll see.

I was not very productive elsewhere. We were out running around on Saturday until 8-9 pm, so I was exhausted by the time we got home. Then we put together the foot stool we bought from Ikea and laid out the rug. Sunday was spent working on wooden iPad displays to be used at a Pep Rally I’m helping with at the college where I work. They’re super basic and were already assembled by Sunday. We just needed to paint them and add felt to protect the iPad while inside. These suckers have been stressing me out, so to have them nearly complete is awesome.

What did you work on this weekend?