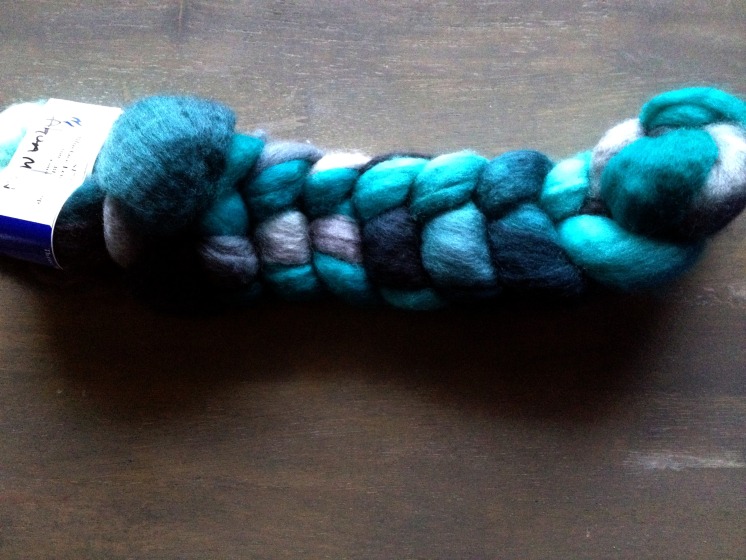 When I saw this roving on Three Waters Farm’s Etsy shop, I thought, I’d really like this. So, I favorited it. Easy. Well, every time after that when I would see it, I wanted it more and more. I can’t tell you how beautiful it looked! It was just, oh my. I was in want really bad.

Last Monday I went ahead and ordered the gorgeous Blueface Leicester roving in the color Aqua Moon. I waited all week in complete anticipation. There’s no reason I should’ve bought this roving. I’m not even done with the first few ounces of loveliness I bought from Three Waters Farm in March. And yet, I had to have it and I don’t regret buying it at all.

Saturday evening, it arrived! Okay, it probably arrived Saturday morning/afternoon, but we were out all day. To say the roving was more beautiful in person than on the screen is an understatement. I was in awe. The hues of blue/aqua are so rich and vibrant. Every once in a while, while I was meant to be helping my husband, I’d stop by the box the roving came in and just pick it up and look at it. Oh, and it’s super soft, too!

The rest of the weekend was a lot of fun. Very stressful, but  a lot of fun. After quite a while saving up, my husband and I went to Ikea and bought our first couch. I cannot tell you how excited I was and completely nervous that, even though we’d been saving for this for a long time, we were about to spend so much! I’m still a little bit shaky, but the couch is so lovely and we can actually sit together on it.

Before, we had a creaky futon that was hard as a rock and about to fall apart. I refused to sit on it, so I’d sit in this pink wingback chair we borrowed from my folks and which which my poor husband hated. Now, our living room almost looks like it’s for grown-ups! I’ve even put up the painted frames.

Speaking of painted frames, I’ve come up with an idea. A while back, I embroidered some random fabric with a tattoo-like heart (you know, the ones that used to say I heart mom?) that had our initials in it. I framed it in one of my little frames I bought at a garage sale at Fort Belknap. It’s so darling! I’ve been thinking I should do some more like that. Maybe, I could even knit up some swatches in the yarn Stacie and I dyed last week. Hm, the possibilities!

We also went out and saw Hunger Games yesterday. I’ll be the first to admit, I expected nothing from it. I kept hearing it billed as the next Twilight, which makes me cringe. I was pleasantly and completely shocked by how much I enjoyed that film. It was dark and dystopian, which I love. I’m actually in the process of scheming with my brother to borrow the books. I really can’t wait to find out what happens next!

What did you do over the weekend? Did you get any crafting done?