I think I’ve settled on using the new yarns for a cowl. I want something where the grey and the neon yellow will really pop. I think that’ll be easiest done in a cowl, which I also just love wearing. I’ve narrowed it down to two, but I need help deciding.

I really like the shapes in this cowl, and it’d be a great way to show off the colours. The other thing with this one would be, which would I use in place of the red? Grey background with neon yellow? Vice versa? It’s $6, which I don’t mind paying for a pattern if I really like it and think I’ll wear the item a lot. 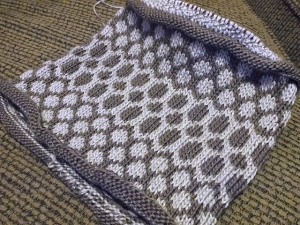 It’s bubbly and cute, and it would use both colours almost equally. That and it’s free.

They’re both so fun looking. I could go with hard, sharp looking edges with the Sonoran, or I could go with bubbly cute with the Japan cowl. I don’t know. I think in the end, whatever I don’t do with this yarn, I may get yarn for and make later anyway. I really like them both. What do you think?